An ABC of Contemporary Reading 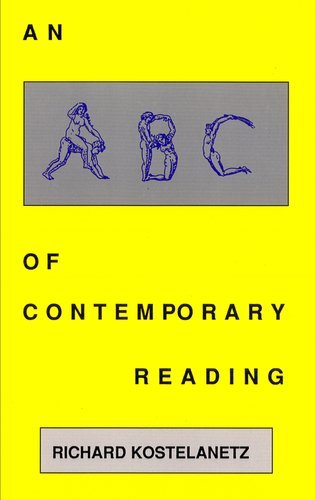 Abstract: Book Description: Long regarded among the principal American critics and theorists of the avant-garde in literature and the arts, Kostelanetz presents a contemporary guide to reading vanguard literature. Recalling the purpose of Ezra Pound, Kostelanetz guides the reader to an 'acceptance and understanding of radically new art.' The writer/artist RICHARD KOSTELANETZ, born in New York City in 1940, attended Brown, Columbia, and the University of London on Woodrow Wilson, New York State Regents, and Fulbright fellowships, taking his M.A. in American intellectual history. He subsequently received fellowships from the Guggenheim Foundation, The Fund for Investigative Journalism, Pulitzer Foundation, the American Public Radio Program Fund, and the DAAD Berliner Kunstlerprogramm, in addition to several grants from the visual arts and media arts programs of the National Endowment for the Arts. For semesters he has been a Visiting Professor of American Studies and English at the University of Texas and a Visiting Professor of graduate theater at Hunter College, CUNY. He has lectured and presented his work at scores of institutions around the world. For his entire adult life he has lived in his home town, currently in the Rockaways after nearly three decades in SoHo, surrounded by thousands of books, hundreds of videotapes, thirty feet of long-playing records, scores of cassettes, several audio and video machines, and his own artwork. Since beginning to publish in national magazines in 1961, he has contributed poems, stories, articles, reviews, and experimental prose to hundreds of magazines both here and abroad. He has written more than fifty books of criticism, cultural history, and creative work, in addition to editing over three dozen anthologies of art and exposition.