A Voice and Nothing More (Short Circuits) 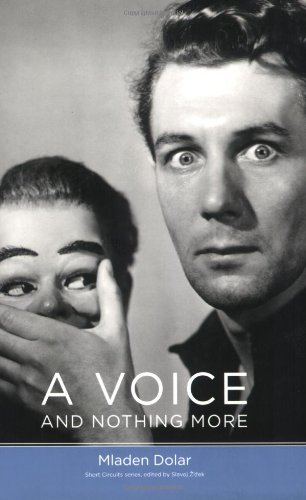 Abstract: Book Description: Plutarch tells the story of a man who plucked a nightingale and finding but little to eat exclaimed: 'You are just a voice and nothing more.' Plucking the feathers of meaning that cover the voice, dismantling the body from which the voice seems to emanate, resisting the Sirens' song of fascination with the voice, concentrating on 'the voice and nothing more': this is the difficult task that philosopher Mladen Dolar relentlessly pursues in this seminal work.The voice did not figure as a major philosophical topic until the 1960s, when Derrida and Lacan separately proposed it as a central theoretical concern. In A Voice and Nothing More Dolar goes beyond Derrida's idea of 'phonocentrism' and revives and develops Lacan's claim that the voice is one of the paramount embodiments of the psychoanalytic object (objet a). Dolar proposes that, apart from the two commonly understood uses of the voice as a vehicle of meaning and as a source of aesthetic admiration, there is a third level of understanding: the voice as an object that can be seen as the lever of thought. He investigates the object voice on a number of different levels--the linguistics of the voice, the metaphysics of the voice, the ethics of the voice (with the voice of conscience), the paradoxical relation between the voice and the body, the politics of the voice--and he scrutinizes the uses of the voice in Freud and Kafka. With this foundational work, Dolar gives us a philosophically grounded theory of the voice as a Lacanian object-cause.