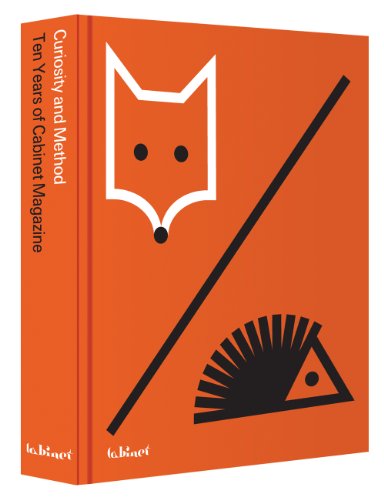 Abstract: Since its launch in late 2000, Cabinet magazine has become a touchstone for a certain approach to understanding culture, one that shuns orthodox distinctions--high/low, serious/humorous, professional/amateur--in favor of a commitment to the idea that all objects, practices and discourses can, if read against the grain, teach us something important about the world. Its hybrid sensibility merges the visually engaging style of an arts periodical, the exuberance of a fanzine and the in-depth exploration of a scholarly journal to create a sourcebook of ideas for an international audience of readers, from artists and designers to scientists, philosophers and historians. Using essays, interviews and artist projects to present a variety of topics in language accessible to the non-specialist, Cabinet has aimed to encourage a new culture of curiosity. This anthology brings together some of the most interesting successes, and a few instructive failures, published in the first 40 issues of Cabinet, virtually all of which are sold out, along with essays specially commissioned for the volume. It includes contributions by more than a hundred writers and artists, including Jonathan Ames, Alain Badiou, Daniel Birnbaum, Matthew Buckingham, D. Graham Burnett, Paul Collins, Simon Critchley, Lorraine Daston, Mark Dery, Brian Dillon, Jeff Dolven, Spencer Finch, Joshua Foer, Leon Golub, Douglas Gordon, Anthony Grafton, Joseph Grigely, Shelley Jackson, Denis Johnson, Wayne Koestenbaum, Jonathan Lethem, Josiah McElheny, Helen Mirra, Albert Mobilio, Alexander Nagel, Francine Prose, Matthew Ritchie, Daniel Rosenberg, Luc Sante, Christopher Turner, Tom Vanderbilt, Marina Warner, Slavoj Zizek and many others.